A large number of warehouses are gradually embracing robotics technology and according to a report by Markets and Markets, the market of warehouse robotics will reach a whopping $4.4 billion by 2022.

Technological innovations such as IoT, and AI has been integrated with robotics technology to bring about effective automation in the warehouses. The use of the robots not only assists the warehouse workforce with their daily tasks but also accomplishes a variety of tasks without any human interference.

The addition of visual, thermal as well as audio sensors to these robots is now slowly enabling them to replace the humans in the warehouse. The haptical sensors in some of the robots even allow them to perceive touch! The data from these sensors enables the robots to make decisions on the basis of the inputs from their surroundings.

But do you know which the most common types of robots that are being used in the warehouses look like? Let us now describe some of the most used. 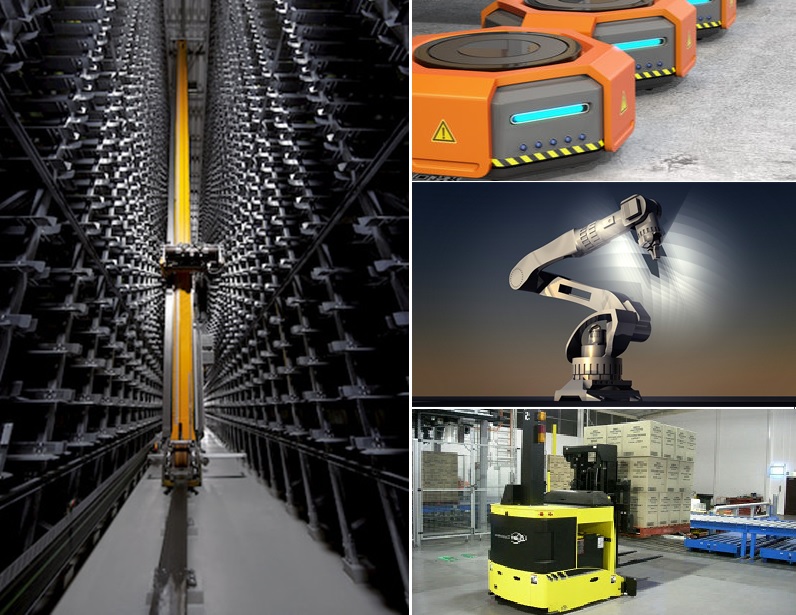 The AGVs and their smaller counterparts AGCs (Automated Guided Carts) allow for easy transportation and inventory in and around your warehouse. They generally move along the magnetic tracks laid in the warehouse. They replace the human labour used for driving pick carts or manually driven forklifts. AVGs that don’t follow a magnetic track come with safety scanners so that they can be used in conjunction with the manual carts. The AVGs are a great replacement for manual labour since they can be used during the nights and on weekends without any additional cost thereby greatly enhancing the productivity of the warehouses.

The collaborative robots work with human workers to facilitate a variety of warehouse tasks. For instance, they can be used to move around the human pickers and act as movable storage bins for picked orders. They can also be used for directing workflows, transporting goods and directing the workers. Collaborative robots often include sensors that can differentiate between boxes and obstacles thereby guaranteeing accurate navigation across the warehouse.

AS/RS are computer controlled technology which helps in inventory management. It is used alongside the warehouse execution tools which direct the processes. They can come in the form of a shuttle attached to a crane or a fixed track that can fetch items between aisles. These days you even have robots that climb up the aisle to retrieve orders from customers. The primary use of AS/RS is to quick the process of fulfilment and material handling.

Just like AGVs, the AMRs are also used for delivering inventory throughout the warehouse facility. One thing which differentiates AMRs from AGVs is that the AMRs don’t need a preset pathway to move between locations. They determine their route by making use of maps, computers and sensors.

These are a kind of pick and place robots that are used for the manipulation of items in the warehouse and distribution centers. They are usually used for palletizing, storage and receiving and picking and packing.

Goods to person or G2P robots are almost the same as AS/RS systems the only difference being that the G2P robots make use of the automated storage systems for delivering the products to the pick stations where the orders are fulfilled by the human workers. Although G2P robots can greatly enhance the efficacy of your processes, they demand considerable infrastructural changes necessitating a good deal of investment.